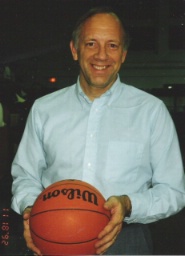 DeMatha faculty members created this award in 1996 to memorialize Thomas Eastman, a DeMatha Counselor and a great friend of the DeMatha community. The Scholarship provides all textbooks for the next school year for eight students. In 2001, the fund was converted into an endowment in an effort to expand the number of awards given and to insure funding for future scholarships.

Today both the endowment fund and the number of awards have grown. In 2003, we added $1,200 academic scholarships to be applied to the tuition of three students, one from the sophomore class and two from the junior class. The sophomore class award is for the student’s junior and senior year.

Q: Who was Thomas Eastman?
A: Mr. Eastman was a counselor at DeMatha from 1988 to 1994, when he lost his battle with cancer. He embodied all of the characteristics that DeMatha strives to instill in young men: devotion, kindness, concern, humility and loyalty.

Q: What is the Thomas Eastman Endowment?
A: This endowment is a fund from which the interest earned pays for the scholarships awarded each year. The endowment continues to grow while financing these important grants.

Q: How can you contribute?
A: You can contribute to the fund directly or by purchasing the donated used books. For more information contact Mrs. Stockton. 100% of the money raised goes into the endowment fund.

Q: How is a student nominated for an Eastman Scholarship?
A: Freshmen, sophomores and juniors who embody Mr. Thomas Eastman’s gentlemanly traits of scholarship, character and commitment to DeMatha are eligible to be nominated for the Book Scholarship by the school’s teachers and staff. One Sophomore and two Juniors will be selected to receive the Academic Scholarships based upon their academic record.

Faculty and staff may nominate deserving students during the third quarter of the year. Students are then notified that they have been nominated and are asked to write about themselves. A panel of faculty and staff choose eight book award winners. The Principal selects the students receiving tuition awards. Students are eligible to receive the book award once during their four years at DeMatha. Winners are announced at Academic Awards Night. Other nominees will receive a letter the day after the Awards Ceremony. Book winners will receive their books in August. In May/June, all books must be returned to Mrs. Stockton.