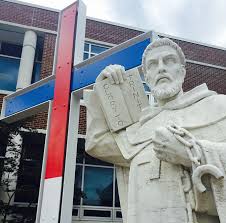 Here is a reflection from our Principal, Dr. Daniel McMahon '76:

The attack on the Capitol yesterday serves as a reminder that our democracy is fragile and requires constant tending. I opened my classes today with the following: "Injustice anywhere is a threat to justice everywhere. We are caught in an inescapable network of mutuality, tied in a single garment of destiny. Whatever affects one directly affects all indirectly. Anyone who lives inside the United States can never be considered an outsider anywhere in this country." This comes from Rev. Dr. Martin Luther King's "Letter from Birmingham Jail" and in it King is reminding us of our shared responsibilities.
I paired it with this reflection from his "I Have a Dream'' speech: "This will be the day when all of God's children will be able to sing with new meaning, 'My country tis of thee, sweet land of liberty, of thee I sing. Land where my father died, land of the Pilgrim's pride, from every mountain side, let freedom ring.' And if America is to be a great nation, this must become true." It is here that King celebrates that second great strand of American ambition--freedom or liberty.
These two elements, community and freedom, mutual destiny and liberty, should be part of every class we teach. I don't often disagree with King but I do think he is not exactly right when (channeling Theodore Parker) he says that the moral arc of the universe is long, but it bends toward justice. I don't have that faith. What I do believe is that WE can and should bend the moral arc of the universe towards justice every day. And the Trinitarian mission has been emphasizing that call for more than 820 years. We are committed to extending that tradition.
BACK TO NEWS