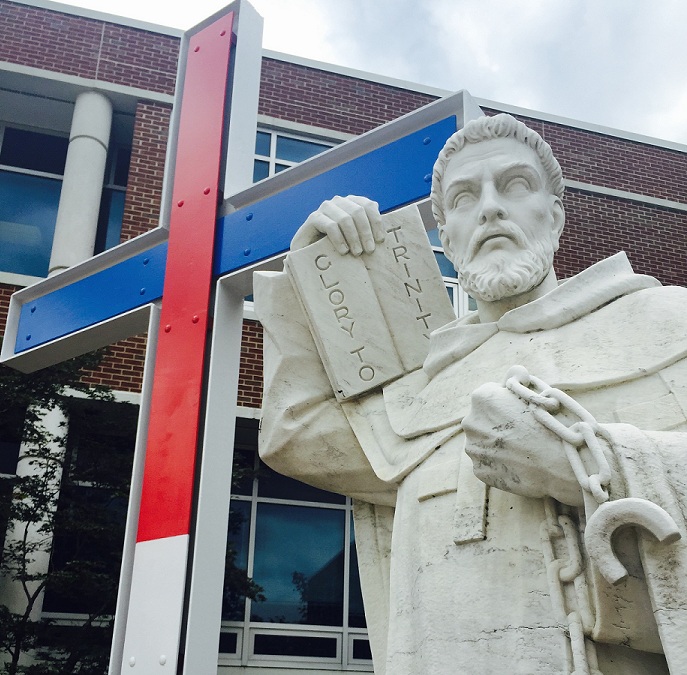 According to tradition, John de Matha, the son of noble parents, was born on June 23, 1160 in Faucon-de-Barcelonette, France. His chief interest lay in works of mercy and prayer. He received his early education at Aix-en-Provence, retired to a hermitage, then studied theology in Paris, where he gained his doctor's degree and was ordained a priest at the age of 32 in December 1192.

On January 28, 1193, as tradition tells us, John celebrated his first Mass. During that Mass, he was struck with a vision of Christ holding by the hand two chained captives, one a Moor, the other a Christian (the Crusades were in full force at the time). The Christian captive carried a staff with a red and blue cross. Three other bystanders at the church that day had the same vision. After the Mass, John decided to devote himself to the task of ransoming Christian captives from the Moors – a work which impressed him as one of the greatest acts of charity since it benefited their souls and their bodies.

According to tradition, he sought out the hermit St. Felix of Valois at Cefroid, France, to spend time in prayer before taking on such an important task. One day while walking with Felix, John had another vision – a white stag appeared at a stream with a red and blue cross between its antlers. John told Felix of his plans and impressed Felix so much that Felix joined John in his mission. John founded the motherhouse at Cerfroid in the region of Picardy and adopted a Rule of Life specifically designed for the Order.

John set out for Rome, where on December 17, 1198, Pope Innocent III consented to the founding of a new religious order and declared that John would become the first superior general. John directed the religious to wear a white habit with a red and blue cross and to take the name of the Order of the Most Holy Trinity and of the Captives. On his return to France, John, possibly accompanied by Felix, was received by King Philip II Augustus, who sanctioned the establishment of the Trinitarians in France.

John spent his life redeeming Christian captives from the Moors, who often tortured the Christians and tried to get them to renounce their faith. John died on December 17, 1213. Before his death, tradition tells us, he met St. Francis of Assisi and introduced Francis to the Frangipani family, one of the benefactors of the Franciscan order. Saint John Baptist of the Conception reformed the Trinitarian Order in 1599.

In 1655, John de Matha's relics were transferred to Madrid; honoring him as a saint was officially approved in 1666 and again in 1694. Today, the Order of the Most Holy Trinity and of the Captives is active on five continents and in many countries, including the United States.

In 1931, the Trinitarians established a monastery in Hyattsville, Maryland, because of the close proximity to Catholic University. In 1946, a small high school was opened at the monastery for young men interested in the priesthood. Soon word spread to the local community and parents asked the Trinitarians to allow their sons to attend. A school building was constructed in 1950, with additions completed in 1959 and 1991. The six acre wireless campus now also includes a Convocation Center, Music Center and Arts Center. The school, which started with an enrollment of 18 in 1946, had 450 students in 1963. Today, DeMatha Catholic High School has nearly 900 students.