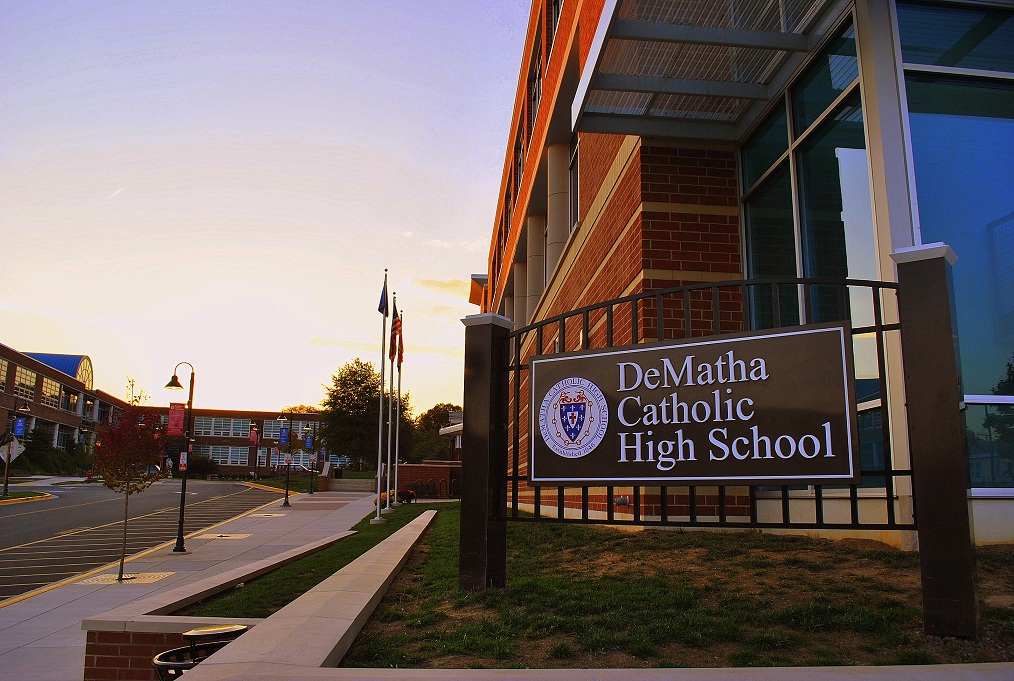 What is DeMatha Catholic High School?

DeMatha Catholic High School is a fully accredited, college-preparatory school located in Hyattsville, Maryland. Established by the Order of the Most Holy Trinity and of the Captives, DeMatha educates nearly 900 young men of differing abilities, interests and backgrounds from the culturally rich and diverse greater Washington Metropolitan area.

Where is Hyattsville, Maryland?

Where exactly is DeMatha located?

The school is located at 4313 Madison Street in Hyattsville, less than two miles south of the University of Maryland, on Route 1 / Baltimore Avenue. See Directions/Campus Map for driving directions.

What is the mission of DeMatha?

The mission of the school is to develop Faith-Filled Gentlemen and Scholars, young men of integrity with responsibilities to God, family, community, and self.

Who is DeMatha named for?

The school was named after St. John de Matha, a twelfth-century French priest who devoted his life to ransoming Christian prisoners from the Moors during the Crusades. St. John and St. Felix Valois founded the Order of the Most Holy Trinity and of the Captives over 800 years ago, and today the Trinitarians continue their redemptive mission in the United States and countries around the world.

When did DeMatha open?

In 1931, the Trinitarians established a monastery in Hyattsville because of the close proximity to Catholic University. In 1946, a small high school was opened at the monastery for young men interested in the priesthood. Soon word spread to the local community and parents asked the Trinitarians to allow their sons to attend. A school was built in 1950, and additions were completed in 1960, 1990 and 1997. The Convocation Center was dedicated in 2010. The school started with an enrollment of 18 in 1946, and today, has an enrollment of nearly 900 students.

How did DeMatha get its reputation?

In its six-plus decades of existence, DeMatha has graduated over 9,500 young men. Its reputation is founded on a healthy combination of sound, forward-looking academic programs and its accomplishments in music, athletics, and extra-curricular activities.

Has the school received academic honors?

DeMatha was twice named as "A National School of Excellence" by the U.S. Department of Education in its Excellence in Education Award Program. In addition, The Washington Post has honored six faculty members with “Agnes Meyer Outstanding Teacher” or “Principal of Excellence” awards for private schools. The National Catholic Education Association recognized four teachers with their Educational Excellence Award for Secondary Schools, and the Archdiocese of Washington honored one of our teachers with the Golden Apple Award for teaching excellence.

What is the faith tradition of your student body?

More than half of the student body is Catholic. DeMatha respects and is accepting of all faith traditions and many are represented in our student body.

How diverse is your student body?

DeMatha is proud of its diversity. It is a reflection of the mission of the school and its founding Trinitarian Order. While white and African-American students comprise the majority of those enrolled, the student population also includes individuals of Asian, Latino, and Asian-Pacific descent.

What about faculty-to-student ratios?

What is the average class size?

What is the school dress?